Beware the Ides of March

For me, the month of March always carries with it a disturbing sense of impending doom.  Call me superstitious, but this is the time of year that I try to heed the advice of my elders and take any warnings that come my way seriously.  Many of you likely recognize the source of my apprehension as the writings of William Shakespeare, the Bard of Avon, and Plutarch, the Greek-Roman philosopher.

What Plutarch documented in Lives of the Noble Greeks and Romans and Shakespeare later memorialized in his play, Julius Caesar, is that a while before Caesar’s assassination at the Theatre of Pompey, a soothsayer warned him to “Beware the Ides of March.”  And again, on the day of Caesar’s assassination, he meets the same soothsayer.  This time it is Caesar who notes that the Ides of March were upon them, arrogantly pointing out that nothing bad had happened to him.  The soothsayer responded by saying, essentially, “The day ain’t over yet!”    And the rest is history.  Caesar walked right into the ambush awaiting him, a theater full of angry senators wielding daggers.

You may be wondering what any of this has to do with Reese.  And the short answer is:  Nothing.   However, I discovered something rather interesting in one of the old AFB buildings on our property.  The former theater, Building #123, has been on our demo list for quite some time as it can not be repurposed as many of our buildings have been.  Years ago, it was broken into and vandalized.  These “educated” vandals obviously saw the humor and irony in their antics.  Just inside the glass doors, in what would have been the lobby area, a fire extinguisher has been set off, and a layer of white powder coats everything in the area.    But traced into the powder, one can see the phrase: “Et tu, Brute?”

At the Base Theater today, the movie poster marquees, now empty, still adorn the front façade of the building.  The sign has been removed and all that’s left are the memories of fun times here when base personnel and their families would gather to see the latest blockbuster.  While the theater could not be saved, many other buildings on campus have been successfully recycled to serve another purpose.   The former photography lab now serves as a laboratory for research in hybrid vegetable growing.  The Parachute Repair Facility has become a physics research lab.  And the former Base Commander’s home has been transitioned into a daycare facility.

The Lubbock Reese Redevelopment Authority has done a remarkable job repurposing the assets of the former AFB.  But there is still plenty of space for lease.  Call us today to discuss your commercial property needs. 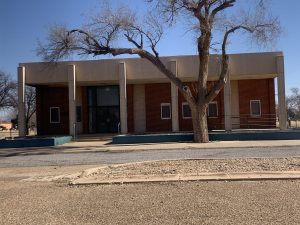 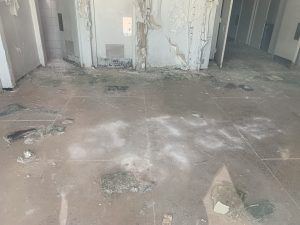 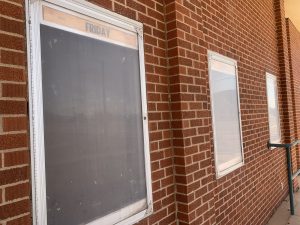